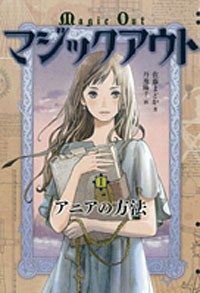 Every citizen of the country of Eteruria, a lone island, is born with the ability to use the Talent (magic). They had lived peacefully by using the Talent to control everything aspect of life, including the weather, electric power, defense, etc. The occupations and social status of the citizens was determined by how well they could use the Talent. Although the main character Ania is from a line of powerful ‘Protectors of the Talent,’ she was born with no ability to use the Talent at all, called 'Untalented'. So, she was despised by those around her as she grew up. However, the day that Ania turned 14 years old, an unprecedented event called “Magic Out” occurred, in which all use of the Talent became impossible. All systems stopped within the country of Eteruria, which had relied on the Talent for its lifestyle. As the electric power generation system also relied on the Talent, the entire country fell into a power outage, and food would not grow because of the unsettled weather. As the entire country panicked, only Ania, who had educated herself by reading books from overseas because she could not use the Talent, knew how to overcome the problem. She began to take action, but none of those in power wanted to listen to an un-talented little girl… This is the first book in a full-fledged, feature-length trilogy that will resonate throughout the modern world about what to do when the unexpected occurs.