An Italian in Tokyo: How to Learn to Live a Happy and Healthy Life 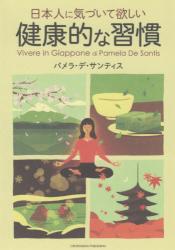 After spending her entire life in a perennial state of anxiety, fear of the future, dissatisfaction, anger and sadness, Pamela De Santis moves to the Land of the Rising Sun. Although her initial relationship with Japan was not a happy one, she starts learning how to take care of her body and mind throughout the study and practice of Japanese (healthy) habits, like morning stretching or bento meal-prep, and old traditions, like tea ceremony, meditation, hara hachi bun me (“belly 80 percent full”), and so on so forth. In doing so, the author talks about her personal life and experiences, using her foreign perspective and “Italianness” as a starting point to get to know the unseen gear wheels behind Japanese society, together with its old and new traditions. The book is also imbued with curiosities and fun-facts about both sides, Japan and Europe, that neither Japanese people nor Westerners are familiar with.

After studying Japanese culture at Sapienza University of Rome, Pamela went to Japan for the first time in 2015 as an exchange student to study Japanese language at Ochanomizu University. After graduating, she studied Japanese cinema at Leiden University Graduate School in the Netherlands, hence moving back to Japan to conduct research on Japanese neorealist film at Sophia University. While writing her master thesis, she worked at the Embassy of Japan in the Vatican City. After graduating, she went to Japan a third time to study sociology and film at Keio University with an Italian government scholarship. Pamela currently works at CrossMedia Group, where she is in charge of foreign copyrights and the international department.