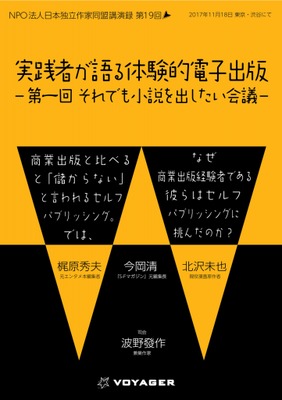 Compared to a few years ago, the hurdles to self-publishing with e-books have dropped dramatically. However, it is also a fact that it is generally said to be "hard to sell" and "unprofitable" compared to commercial publishing. The three speakers in this session all have experience in commercial publishing. Why did they decide to self-publish? What are their reasons? And what were the results? What did they gain from the experience: hope or disappointment? ...... The three speakers, all of whom took on the challenge of e-publishing in different ways, will share their "honest" e-publishing experiences.

IMAOKA Kiyoshi：Born in Yokohama in 1948. Former editor-in-chief of S-F Magazine (Hayakawa Shobo). As an editor, he worked on the works of writers such as Shinichi Hoshi, Sakyo Komatsu, and Yasutaka Tsutsui, and fostered newcomers such as Chohei Kanbayashi and Mariko Ohara. Author Kaoru Kurimoto is his wife. Supervised the sequel project to Kaoru Kurimoto's last work, "The Guin Saga". Representative director of Tenro Production. Jazz singer.
KAJIWARA Hideo：Born in Kofu in 1949 and raised in Yokohama. After graduating from the Faculty of Law at Keio University, he joined a publishing company. Since then, he has planned, composed, and edited numerous puzzle books, talent books, and books related to TV programs for over 40 years. Currently, at Noah's Books (the company he founded with mystery writer Tatsuya Yoshimura [who died suddenly in 2012] to realize the "Sousuke Himuro 100-volume series"), he plans and edits his own kanji puzzle books and publications.
KITAZAWA Miya：Born in 1970. He was selected for the Rookie of the Year Award in two magazines, Shogakukan Big Comic Spirits and Young Sunday. After making his debut as a manga artist in the same magazine, he became a manga author. He is a pioneer of the system in which a manga artist divides his time between weekly serials as a manga author. He is also a leading figure in lowering the hurdle in the sense that the age and gender of the manga author are not required. In 2017, she discovered the fun hobby of self-publishing short stories on KDP, but it is unclear if he will continue.
NAMINO Hassaku：Born in Tokyo in 1971 and raised in Shinshu. After graduating from high school, he had a rough time as a ronin, but was lucky enough to get a part-time job at a major publishing company. He was also involved in the development of SideBooks. Last year, he made his debut on his own as an independent dual-career writer, and began focusing on e-books and e-zines. He is also a contributor to Tortall, Magazine Voyage, and Gekkan GunSu. He is also an active stray editor.