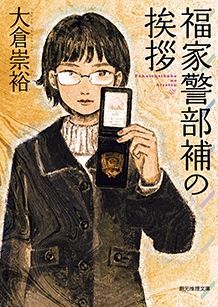 Diminutive Lieutenant Fukuie—no first name given—might not look much like a detective (“I get that a lot,” as she says), with her rimless glasses and cowlicked hair, but she serves on Tokyo Metropolitan Police’s Criminal Investigation Bureau, First Division. The murder division. When it comes to cracking cases, she can’t be beaten. From seedy bars in Tokyo’s back streets—complete with bartenders polishing glasses—to quiet sake breweries in the mountains, Fukuie’s steel-trap mind and razor instincts cut through the lies until she has the culprit trapped.
Enter Inspector Fukuie is the first volume in a series of five books (- by Jim Rion; sample translation and proposal available).

Takahiro Okura is an award-winning writer of mystery and science fiction with a career going back over twenty years. He won the Sogen Mystery Short Story Prize in 1997 and Futaba Publishing’s New Mystery Writer’s Prize in 1998, and in the time since has published over 40 book-length works, including both ongoing series and standalone works. He also has published film and television novelizations, including two Japanese language novelizations of episodes of the author’s favorite television series: Columbo.
His Inspector Fukuie series has inspired two different Japanese television adaptations, and another series Keishicho Ikimonogakari (Metropolitan Police Department: Animal Control) has been adapted as well.