The Empire of Corpses 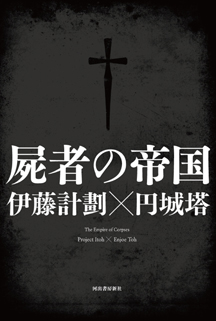 The story begins at the end of the 19th century in Europe, where a new technology has spread that allows corpses to be
installed with an artificial soul to create “Corpses” which can be utilized as laborers and soldiers, and this new technology
spurred an industrial revolution across the Western world.
A medical student in London named John H. Watson (who would later become a partner to Sherlock Holmes) was
scouted by a government agency to serve as a secret agent, and received orders to infiltrate Afghanistan as an army
medic. Watson discovered that Corpses were being used in huge numbers for military purposes in Afghanistan.
Watson gradually became aware of the fact that “The One” , the original creature created nearly 100 years prior by the
genius scientist Victor Frankenstein, was still alive somewhere in the world, and seemed to be orchestrating some sort of
plot. Watson left Afghanistan and crossed over to post-Meiji Restoration Japan to meet up with Rhett Butler and the
lovely Hadaly of the Pinkerton Detective Agency. In pursuit of The One, they head for America, which had just welcomed the end of the Civil War, and finally caught up with The One.
The Oneʼ s plot was to implement the “All Mankind Resurrection Initiative” .
What is life? What is consciousness? What is a soul? Young Watsonʼs quest was filled with such questions that would
lead him to a shocking conclusion.
The prologue and plot of this novel was created by Itoh, who passed away without the chance to finish the masterpiece
he started. Therein entered his friend Enjo, who promised to carry out Itohʼ s dying wish. Enjo become something of a
ghost, slipping into the mind of his deceased friend, and finally finished the story, which became a huge topic in the
media even before its release.

Project ltoh (1974-2009) debuted with Gakusatsu Kikan (Genocidal Organ), and took first prize of the "Best SF of
2007" in SF Magazine. He is also the author of Harmony (Haikasoru 2010), which won the Japan SF and Seiun
Awards in Japan and was nominated for the Philip K. Dick Award In the US. After a long battle with cancer, ltoh
passed away in 2009. The ending of Metal Gear Solid: Peace Walker, the 2010 PSP game, was dedicated to him.
Toh EnJoe (1972-) was born in Hokkaido, won the Bungakukai Prize for New Writers and was nominated for the
Akutagawa Prize. In 2010, the novella U yu shi tan received the Noma Prize for New Writers and was short-listed
for the Mishima Yukio Prize. He garnered the late-2011 Akutagawa Prize for another novella, Dokeshi no cho.