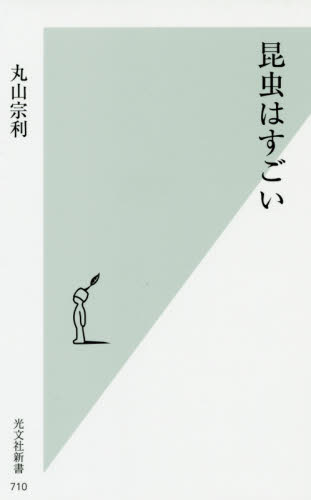 With over a million species identified to date, insects are said to make up more than two-thirds of all living creatures on earth. Though more often than not they are regarded as a lowly form of life and don’t get much respect, they live—and were doing so long before humans—in accordance with complex social and cultural arrangements: hunting, cultivating, domesticating, building, cooperating, warring, enslaving, straying from partners, and so forth. In this book targeted at the general reader, a leading entomologist presents the fascinating “untold truths” about insect life and society that have come to light in the latest research. Eight pages of color plates at the front of the volume as well as 127 monochrome photos scattered throughout the text illustrate the abundance of topics addressed.

One of the most fascinating subjects is insect mating behavior. Much as a human male might offer an engagement ring to his intended before marriage, a male dagger fly courts his partner prior to mating by presenting a morsel of food wrapped beautifully in silk produced by specialized cells in his forelegs. Male Gifu butterflies are jealous mates, who plug the genitals of females they have mated with so that they cannot conjoin with any other male. When a female giant water bug mates with a male who already has offspring, she kills all of her stepchildren so that her mate will protect only her own biological offspring. Some stinkbug males display homosexual behavior, injecting their sperm into another male—apparently with the intent of having that surrogate pass the sperm on when he subsequently mates with a female. Although they may appear to be living purely by instinct without plan or intent, these and other insects are in fact engaged in fierce competition, displaying great ingenuity and resourcefulness in meeting their aims.

Author Munetoshi Maruyama asserts that studying insect societies and lifestyles can be instructive in considering our own human behavior. We, too, are creatures of instinct, and readers who feel ground down by the stresses of contemporary life may learn from these smaller creatures the importance of listening to the voice rooted deep within.

Maruyama has struck a chord with the reading public for his fresh perspectives and easily accessible explanations, leading to brisk sales for this work. There were over 130,000 copies in print as of August 2017, and the book ranked seventh in the 2015 Shinsho Grand Prize competition sponsored by publisher Chuo Koron Shinsha.

Munetoshi Maruyama (1974–) is assistant professor at the Kyūshū University Museum. He completed his doctorate at the Hokkaidō University Graduate School of Agriculture, and worked as a researcher at the Japanese National Museum of Nature and Science as well as the Field Museum of Natural History in Chicago prior to taking up his present position in 2008. He is the leading authority in Asia on ants, termites, and the many different insects that coexist with them. Maintaining an active research program both at home and abroad, he has identified many new species and regularly publishes academic papers about them. His publications include Tsunozemi, arienai mushi (Treehoppers: Incredible Insects), Mori to mizube no kōchū shi (Beetles of Woods and Shores), Ari no su o meguru bōken (Ant Nest Adventures), and Ari no su no ikimono zukan (The Guests of Japanese Ants). Maruyama received the Entomological Society of Japan Society Fellowship Award in 2012.