The Cherry Has Bloomed 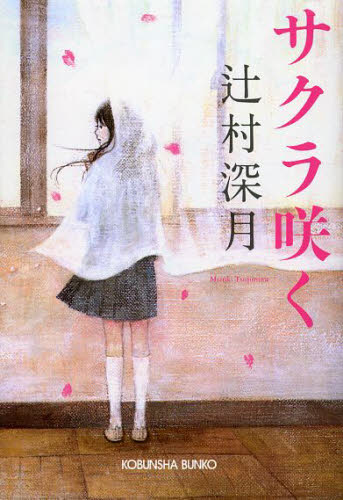 In Yakusoku no basho, yakusoku no jikan (Agreed Time, Agreed Place), 13-year-old Yū Kikuchi arrives as a midyear transfer student at Tomohiko Takemiya’s middle school. Short and bespectacled Yū barely registers on track athlete Tomohiko’s radar at first, but then Tomohiko discovers that Yū has a futuristic gaming device he’s never seen before and the two boys become fast friends. One day Yū reveals to Tomohiko that he has in fact traveled back in time from 100 years in the future in order to recover from an illness. The two hide the device in the hills behind the school, and it becomes their daily routine to go there and play games on it after school. When they learn that an archaeological dig is about to begin in those hills, they go to retrieve the device, only to get caught in a landslide and end up buried under the debris. Even though he knows it’s forbidden, Yū triggers a time-slip that sends Tomohiko back to before the landslide—but is himself returned to the future time from which he came. Tomohiko vows to become a doctor and find a cure for Yū’s illness so that the future in which he lives will be changed.

The main character of the title story is Machi Tsukahara, an introverted seventh grader at Tomohiko’s school. One day, a single sheet of letter paper falls from a book she has checked out of the school library. On it is written the phrase Sakura chiru (“the cherry has scattered”). The next book she picks up happens to have a piece of letter paper in it as well, and she is surprised to find on it words that exactly echo her own sentiments: “I can’t tell other people how I really feel.” She writes a reply and returns the book, and soon discovers another note . . . As one exchange leads to another, she eventually discovers that her correspondent is her classmate Shion Kōsaka. Shion became deeply depressed after failing the entrance exam for a private middle school and, still unable to recover, spends the school day in the nurse’s office or library by herself, refusing to attend classes.

Once she learns this, Machi understands the original message she found: Sakura chiru is the traditional five-character code phrase used in telegrams sent to inform the family back home that one has failed the entrance exam. Machi and several other classmates place the message Sakura saku (“the cherry has bloomed”—the code phrase used in telegrams to signify exam success) in a book for Shion to find. Shion is moved by the way Machi and the others have reached out to her, and finally shows up in class after a ten-month gap. As Machi rejoices in Shion taking a new step forward, she realizes that she, too, has changed: she has learned to express herself to others in ways she never could before.

The final story, Sekai de ichiban utsukushii hōseki (The Most Beautiful Jewel in the World), centers on high-school junior Ippei Takemiya, who is president of the film club, currently at just three members. When he sees senior Amari Tachibana in the library, he decides he wants to make a film with her in the lead role: she was previously a star in the high-school drama club before abruptly quitting without saying why. He approaches her and, refusing to take no for an answer, gets Amari to agree she will consider taking the role if he finds a certain book for her. Ippei and the other members of the club begin looking for the book based on a fragmentary description, knowing neither its title nor its cover design. In the course of their search, they learn that Amari used to be a dweeb in middle school. In fact, she had quit the drama club because she was afraid that being at center stage might lead to her past coming to light. When they fail to find the book Amari is looking for, the film club members produce a picture book based on the limited descriptions she has provided. Moved by their creative spirit, she agrees to be the heroine of their movie. At about the same time, Ippei’s father Tomohiko (from the first story) succeeds in producing the medicine he had vowed to develop when Yū Kikuchi and he were in middle school together.

From the simple pleasures of shared experience to unbreakable promises made and more, author Mizuki Tsujimura has captured the salad days of youth with a fresh and evocative authenticity.

Mizuki Tsujimura (1980–) was an avid reader from an early age, and while still in grade school was so struck by Yukito Ayatsuji’s puzzler Jukkakukan no satsujin (Murder at Jukkaku Hall) that she began writing mysteries of her own. She made her literary debut in 2004 by winning the Mephisto Award for Tsumetai kōsha no toki wa tomaru (Time Stops in the Ice-Cold School), an expansive novel she had first begun writing in high school and spent her college years completing; it was none other than Ayatsuji who phoned to notify her of the award. Her mother-daughter novel Zero hachi zero nana (Zero Eight Zero Seven) was short-listed for the Naoki Prize in 2010. In 2011 she won the Yoshikawa Eiji Prize for New Writers for Tsunagu (Link), and was short-listed for the Naoki once again with Ōdā meido satsujin kurabu (Made-to-Order Murder Club). She finally won the Naoki Prize in 2012 for her story collection Kagi no nai yume wo miru (Dreaming a Dream without a Key). Also in 2012, her novel-length cozy mystery Honjitsu wa taian nari (It’s an Auspicious Day) was adapted into a television series. Other works include the youth novel Shima wa bokura to (Our Island), Mōmoku-tekina koi to yūjō (Blind Love and Friendship), and Haken anime! (Anime Supremacy!).