Keep asking what is electronic publishing? 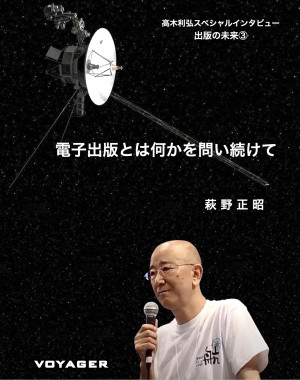 Voyager has been dedicated to digital publishing for 30 years, since its founding in 1992.
Why have we been doing this? We have lived our lives selflessly and have not been thinking about the future. However, looking back and retracing the records of the past, we can see how we felt then, which we can only understand now.
This book is based on an audio interview conducted in 2014 by Pamlink for the third installment of the "Future of Publishing" series, "Keep asking What is Electronic Publishing? The interviewer is Toshihiro Takagi, former editor-in-chief of MACLIFE.
The author talks frankly and spontaneously about the background of Voyager (Japan) and how the company has dealt with the various twists and turns in its business. It may be just the history followed by an extremely small company. However, you will surely understand the reality of the "darkness that lies ahead" that everyone must face in life.
Table of Contents
Continuing to Question What is Electronic Publishing?
Chapter 1: Before Establishing Voyager
Chapter 2: Early work "A Hard Day's Night
Chapter 3 From Expanded Books
Chapter 4: From Galapagos to Smartphones
Chapter 5 Encounter with the Internet Archive
Chapter 6 Aozora Bunko: Memories of Michio Tomita
Chapter 7: New Media as Reported by Yasuki Hamano
Chapter 8: Poor but "Free
Appendix 1 Publishers & Advertisers 100th Issue Interview
Appendix 2 Don't Forget to Take on Challenges
Afterword

【Masaaki Hagino】
Since founding Voyager in 1992, he has been consistently involved in electronic publishing and pursuing publishing as a small-medium.
Born in Tokyo in 1946, he started his career in the educational film department of Toei in 1970, then in laserdisc production and planning in 1981, and in 1990, as director and head of a film production at Pioneer LDC, he was involved in film business development. 1992, he founded Voyager Japan. 2013, he retired as representative director of Voyager, Inc. He is currently a director.

【Toshihiro Takagi】
Born in 1955. He has served as editor-in-chief of "MacLife" and other computer-related magazines. Planned and developed the knowledge processor Kacis Publisher/Kacis Writer at Kacis, Inc. and won the "Software Product of the Year 2001" award. His publications include "The History of Jobs & Apple," "The Legend of Jobs," and "iPhone/iPad Hit Apps Research Report 2012. Representative Director of Creation Inc.