Golden Habits" to Improve Children's Academic Achievement: Tips for Home Study You Can Do Right Now 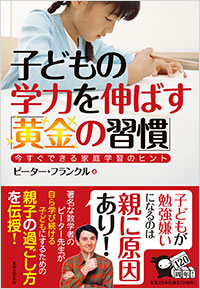 How can we help our children to have "wealth" in their minds and hearts without losing out to the economic and educational disparities?
How can we help children gain self-confidence?
What are the effective ways to learn Japanese, math, and English, which are the foundation of academic skills?

Based on the author's own experience, this book is full of tips for children to learn independently and enjoyably!

Mathematician and street performer.
Born on March 26, 1953. Born in Hungary (Kaboszpár).
Won a gold medal at the 1971 International Mathematical Olympiad. Entered the Department of Mathematics at the University of Otvos; received a state scholarship to study at the University of Paris VII in 1975; received a doctorate in mathematics in 1977; invited to the Academy of Sciences of the USSR. Invited by the Academy of Sciences of the USSR; received national certification as a stage performer at the Hungarian Circus School in 1978; defected to France in 1979; invited to the United Kingdom, West Germany, India, the United States, Sweden, and other countries from 1980 to 1988 to give lectures and conduct joint research, while performing street performances on the streets of those countries. In 1987 he became a French citizen, and since 1988 he has lived in Japan. 1998 he was elected as a member of the Hungarian Academy of Sciences, the highest scientific institution in Hungary. Currently Executive Director of the Mathematical Olympiad