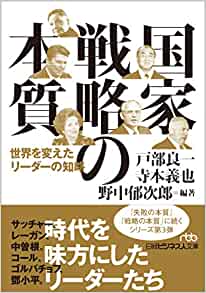 Japan is lamented for its lack of leadership. At a national level, there is no shortage of stories to tell about the economic downturn, the turmoil in the world order, and even at the corporate level.
However, simply lamenting the absence of leadership and hoping for the emergence of a true leader will not bring us any prospects. We need to figure out what it is we are looking for from the leaders.

There are many qualities of a good leader, such as personality, human appeal, driving force, and conceptual ability, but just as important as these qualities and abilities is a strategic perspective that moves the country itself, beyond the strategic conceptual ability required of business unit heads and field commanders. This is the strategy of the nation in this book.

National strategy encompasses the above qualities and abilities, and can be said to be the ability to add something to them. In Japan, where the crisis was not exposed by the Cold War and economic growth, it was not considered so much, but in 21st century Japan, where the international order has become unstable and low-growth economy has become the norm, it is an indispensable ability.
This book is a retitled version of "The Essence of State Management" published in 2014. It analyzes what is and what should be the strategy for managing a nation.

With the rise of China and the destabilization of the Korean Peninsula, Japan, which has been focusing on the economy, is being forced to change its security policy. This book is a must-read now.